Just a quick something from a long time ago that maybe one day I shall revisit! I can see the difference in my writing style even from this, thought it would make a nice contrast piece to how I write now.

Oreon stared blankly from the long arched gothic window out onto the dark mountains and valley beyond, the moon barely illuminating the still waters of the lake in the distant crevice. No sounds carried on the wind, just an eery quiet like always in the still landscape laid before her. Every night this heavy silence cloaked in deathly dark with nothing but the howl in the air and the sometimes distant rustle of trees. She sighed and rested her face against the smooth polished wood of the window pane enjoying the feel of it on her skin. The breeze from the open window was gentle and smelled strongly of damp wood and floral fragrance, she could almost imagine being outside in a flowering field this way on a sunny day. A sharp contrast to what her eyes scoured. She felt the small waft of air behind her, almost un-noticeable, she felt his presence, even without looking she knew he had returned.

‘Lucah.’ She smiled as she said his name, her insides warming with affection. Turning slowly into the candle lit room he stood by the end of the huge bed, his tall dark frame as always dressed in black, long tailored and sinister. His dark hair and pale skin illuminated by the candles by the bed giving her much needed light in the darkness. His eyes glowing like a nocturnal animal in the semi-gloom of the cast shadows.

‘Oreon’ his reply matched her tone. A greeting , nothing more. She glanced to the matching window further along her grand room, it was open, obviously his point of entry. He had been outside , some errand for her father maybe? Hunting? she never dared to ask what he did in the darkness of the world. It was best she never actually knew for maybe if she did she would have the sense to fear him.

‘Your father asked me to bring you this…….’ his voice low and dark like his presence.

She did not tear her gaze from the other window for a moment, she held her breath , the pause speaking a thousand words as her frame straightened and the hair on her neck tingled. She brushed it off with a tight smile and turned to him trying to be convincing. He was holding a box, small dark and shiny in his hand, he stretched it out to her motioning to take it but she resisted the urge to grit her teeth and slap it away. Her father and his gifts!! In place of actual presence, she could not remember the last time he graced her chambers or showed her that he still existed in this place. This prison.

‘What is it?’ she said in irritation.

Lucah shrugged ,his eyes moving from her face to the box, his jaw clenching for a mere second indicating he was not in the mood for her to be churlish. He knew her too well.Just as she knew the meaning of his many looks and frowns.

‘Just take it’ he tossed it towards her causing her to react with a catch, it was light. She ran her fingers over the polished leather box examining it more closely. Dark leather with an inscribed letter on the surface, it looked old. A click to open the slender parcel revealed a silver necklace with a very ornate almost lace-like pattern woven into the fine silver strands, it was grandeur and held dark red precious stones within its intricate cobweb. If it had been a gift from Lucah then she would have cherished it, but it had come from the one person who held no importance anymore. She clicked it closed again and tossed it onto her huge bed with disinterest. Lucah looked amused and moved to lean lazily against the poster leg of her bed.

‘How much longer can you go on acting like this ?’ he even sounded amused, watching her from his perch.

‘Go away Lucah!’ there was no real conviction in her voice. She had heard this lecture so many times it had gotten old.

‘You know that I cannot do’ She had turned from him back to her window, her view to freedom and far off places, she didn’t hear him move, she never did but he was suddenly right beside her, his voice at her ear

‘He does not know how to love’ she responded tartly , ignoring the warmth she always felt around him.

‘We all love in our own way!’ He smiled when he spoke and the effect was subtle on his tone.This caused her to turn and glance at his face, this small statement always a reminder of how different she was and did not belong here. He was looking out into the darkness , his perfect chiseled face, classically handsome, flawless in fact, like every other being in this place. His eyes steadfast on something in the distance. Something far and small no doubt that had caught his eagle eye attention. She trailed her eyes down towards his mouth, the only part of his face that was not pale, slightly blushed and concealing so much, yet looking so harmless.

‘Is that why he keeps me here? In this prison, within these walls? Day after day! Because he loves me?’ she pushed off from the window feeling her irritation rise again easily, her eyes sweeping the room. A room most women would die for. Grand, opulent furniture, high ceilings, roaring fireplace and polished wood floors. Huge wardrobes with every kind and colour of gown imaginable. Dressers full of scents and oils and cosmetics. She wanted for nothing but what was the point to it all? She never left the floors of this suite, this mansion in the mountains. Her rooms although large and many were nothing more than a prison with a pretty face. Lucah her warden. Always watching, always making sure she stayed within her boundaries. For as long as she could remember he had been there observing, standing in the shadows and watching her grow. Her father’s servant! Since her first steps , he was in the background. Her nannies had come and gone, some longer than others but he had been there throughout. Strong, silent and ageless.

‘Oreon?……. You know how this works! Why you’re here! Why do you always fight this and make things difficult?’ He pushed away from the post and lazily wandered across her room, his fingers trailing some of the trinkets and tokens on a nearby sideboard, its polished wood, the gold and crystal fancies that had all been fatherly gifts! She heard him sigh as he stopped on a framed picture.The same picture which always seemed to draw him every time he wandered the walls this way. The only picture in this room which was not a painting of stunning scenery and flower meadows she used to brighten her day.

The woman in the picture was smiling, radiant and beautiful, her face so like Oreon’s yet so different in ways. The grey tones of the Photograph making her almost flawless , timeless, much like him. He touched the face on the portrait for a second then moved away. Oreon’s eyes had followed him , watched him stop on her mother’s picture , she had felt something from him even at this distance . Sadness? Maybe. She did not know what Lucah felt whenever he looked at that picture but it always had the same effect. She had asked him once about her. He had told her he only knew her briefly and not that well. He lied, his actions betrayed him anytime he passed that picture but she knew he would never admit it.

‘Is this all there will ever be to my life Lucah?’ her voice was low , almost a whisper. Was she really asking him or just letting her frustrations leak out. Her eyes met the shiny deep dark wood of the floor, the fire casting dancing shadows across its glossy surface. She heard him shift, knew he was looking at her yet he had no answer. She knew already the answer to her own question. She would live and die in this place, only seeing sunlight and life through the windows at which she sat night after night. Her thoughts began to wander towards the emptiness of her captive future but were interrupted by his footsteps approaching her, His gentle fingers cupped each side of her face as he lifted her gaze. His face always unreadable, like a perfect picture portrait of the perfect man, never betraying anything. He leaned forward brushing her forehead with his lips. Cool and gentle skin, always so cool to the touch even when the fire roared around them . A movement of affection and gentleness that was so in contrast with how he looked. Strong, dark, cold and dangerous.

‘Sleep!’ He turned her towards the bed gently pushing her towards it ‘I will be through there if you need me…..like always!’ She felt the coldness drift through her at his release, his skin always so cold still had a warming effect on her when they touched. She knew better than to protest. What did she have to stay awake for anyway? The grandfather clock in her main sitting room down the hall was gently chiming midnight. The false peacefulness and serenity in that sound. To bed she went. 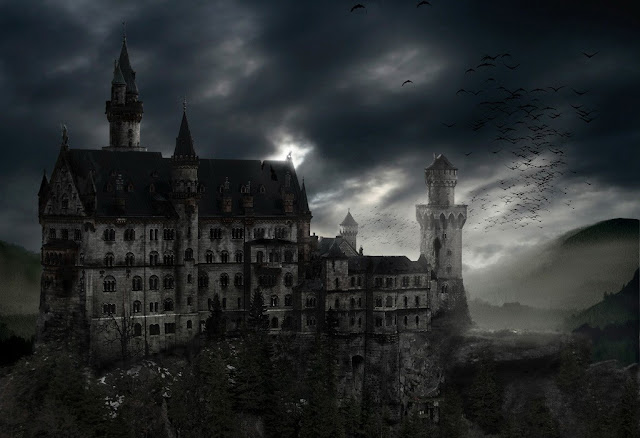