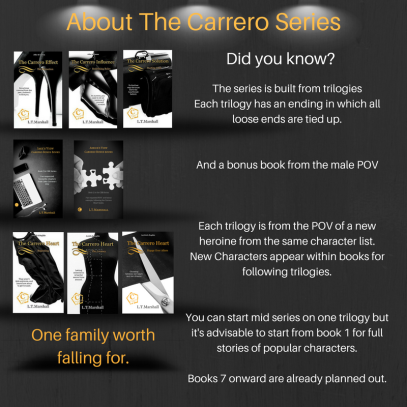 ⭐Books to date – click the books to be taken to Amazon

⭐⭐⭐Books 1 – 3 are the story of a young, emotionally scarred woman, embarking on a new relationship with her employer. Recently promoted to his side; a friendship forming which helps her face her scars, her past and forms a new life built on mutual trust and love. This is an epic turbulent story about letting people in, letting people go and learning to reconnect with emotion. Lots of engaging characters, twists, turns and drama.

⭐The Carrero Effect – Emma Anderson has everything in her life worked out. She has her perfect job in a Manhattan empire allowing her to live a quiet and organised safe existence. A necessity to her, after a childhood filled with bad memories, abuse, and a mother who was less than useless. But, with it comes a problem, one that could derail everything she thought she needed in her life. Her promotion sends her straight into the close employment of young, gorgeous, playboy billionaire, Jacob Carrero with his formidable reputation for being a player. Stuck as his right-hand man, every waking moment of every single day, she realises he is exactly the type of person who could drive her crazy, and not in a good way. Like chalk and cheese, he is everything she’s not. Compulsive, confident, laid back, dominant and fun, with a seriously laid back attitude to casual sex and dating. Jake is the only one with an ability to steamroll over her manicured ice maiden exterior, who is not phased by the closed in demeanour and cool manners, but as much as she wants to, letting him in is another thing entirely. A past that made her man wary and no desire to ever let one close enough to hurt her again, Jacob Carrero has his work cut out. He is not someone who takes NO for an answer and will have to learn how to break through if he wants more than the mask she shows the world. Jake needs to show her that even some one like him can change when that one girl that matters breaks through. Love-able sexy characters and deep emotional topics. Contains some mature, adult content and language.

⭐The Carrero Influence – Emma Anderson has had her entire world turned upside down and not for the better. The only man in her life she has ever been able to trust is gone because she just couldn’t let him in, her job a distant memory, because of the fact she had been weak enough to let things go too far, and her future bleak. She has lost the facade she spent years perfecting and has been left in a desolate slump, trying to claw back some normality. She’s heartbroken, coming to terms with the fact that she loves him and she’s lost him, with no way to find her way back. That is until he walks straight back into her life, and maybe there is a chance at something more this time if he could maybe feel the same. But ‘more’ comes with analysing everything that’s come before, the mistakes they made, and the baggage that is now attached to him in the form of Marissa Hartley and his unborn child.

⭐The Carrero Solution – The final conclusion to the story of Emma Anderson and Jake Carrero. The Boss and PA who went from strangers to friends, friends to lovers, then lovers who have been torn apart by his stupid impulsive mistake. So much in their relationship left unsaid and un-remedied and neither know if they can find a way back to each other and fix what could have been the happy ever after they both need. Emma doesn’t know if she can go back or trust him again and so many complications cave in on her to cloud her way. He needs to find a way to prove once and for all that she is his world, and she needs to learn to stand up to the force that is Carrero if she is ever going to be happy.
Relationships that were flawed and need to find a better footing, and there are still problems hanging over them in the form of Marissa Hartley. Friends who are just as heartbroken and torn, and mothers who do nothing but disappoint you, no matter how much you try. This is the Epic Finale to Emma’s story and an emotional roller coaster of a read which promises to make you laugh, cry, gasp and maybe feel a little warm inside.
The answers to every question you had in this epic tale.

⭐⭐⭐Books 4 – 6  follow the character Sophie, from the first books, and Jake’s brother Arrick. A close friendship formed by mutual need that leads somewhere neither expects.

⭐The Carrero Heart / Beginning – Sophie Huntsberger found her way to a new family and a new life when she ran from the physical and sexual abuse at the hands of her father as a child. She has blossomed, healed in ways she never imagined she would or could within the safe arms of her adoptive family.
Arrick Carrero has been her rock, her best friend and her protector for years, but even he cannot get to the root of her growing emptiness. Sophie is lost, she’s reaching out for anything to fill the void and cure whatever ails her. Unable to understand why a life that is now so blessed does not complete her.
When Sophie comes to the realisation that maybe the cure has been within arms reach all along, it brings her world crumbling around her. Arrick cannot control the car crash of confusion that happens in his own mind when feelings become clear, hearts get bruised and things change to pull them apart.
What was once innocent, now comes into question, and life does not always let the heart prevail.

⭐The Carrero Heart / The Journey – Sophie has been living her life for the past three months. She is finding her feet, her strength, and doing it in an Arry’less world, determined that she no longer needs him in any way shape or form. She’s heartbroken, but refuses to let him infiltrate her everyday life and take her from the goal she set herself. To succeed as something more and prove to not only everyone else, but herself, that she can do this.
Unfortunately for her, the wheels of fate, and the depth of how he feels about her, tug them straight back together, like magnets pulled by a stronger force that neither can fight. The heart is a funny thing, it can both hate and love, hurt and heal, at the same time.
Sometimes trusting someone the first time is so much easier than having to forgive them for breaking your heart. Something given so readily once upon a time is not so willing to peek out from the safe shadows. Sophie has to decide if she can let that one person back in, that she never thought would ever betray her.

⭐The Carrero Heart / Happy Ever Afters – SOPHIE HUNTSBERGER and ARRICK CARRERO start their new life together in France, where Sophie hopes to follow her dream and finish her term in the Paris Fashion Academy.
Everything seems too good to be true and a happy ever after is clearly on the cards. Or is it?
Unforeseen long separations and being cut off from family and friends half way across the world all take a toll.
And that’s on top of the conflicts Sophie is facing from fellow students who see her as a threat.
While the threads unravel faster than Sophie can sew them back up, life takes a drastic turn – and Sophie and Arrick’s love faces a critical test.
This is the final installment of the Sophie and Arrick story. Is it the end? Or is it happy ever after?
You’ll be holding your breath to the very last page.
Contains some mature, adult content, and language.

⭐⭐⭐Books 7 – 9  featuring Alexi Carrero and Camilla Walters. When an ex hooker is saved by the mafia king himself, their relationship kick starts a turbulent affair that neither are prepared for.

⭐The Carrero Contract / Selling Your Soul –  Camilla Walters thought she had come to the end of the road when fate caught up with her. No where left to run or hide, on the verge of becoming fish food at the hands of drug runners she owed a lot of money to.
That was until fate brought her Alexi, head of the family Carrero – The unexpected hero who saved her ass and changed her life in one easy manouvre.
Who knew she would have to sign her soul over to the devil in a bid to stay alive and in doing so, lose her heart and mind in the process.
This is not your typical hearts and roses story – Let the games begin and the war commence.

⭐The Carrero Contract/ Amending Agreements – Camilla Walters finds herself on the outside of Alexi Carrero’s world after he sets her loose. Following a dramatic end to their roller coaster relationship and is trying to start over again.
She’s healing, wounded and low, but with determination to get back on her feet as fast as she can.
Fate takes a turn one awful night, and leads her straight back to the door of the people she swore never to rely on again, pulling her back into the world she had run away from. The Carrero world and the man who broke her.
Like magnets drawn to one another it is obvious their story is not over yet.
Will Camilla ever be able to forget the past and what he did to make her hate him? Can she ever trust Alexi Carrero?

⭐The Carrero Contract/ Finding Freedom – CAMILLA WALTERS and ALEXI CARRERO embark on the final installment of their trilogy.

Love confessions hanging in the air and yet a fog of mistrust and confusion clouds the way. So much has passed and yet so much still to resolve. Danger still lurking in dark corners, threatening her life and all she is building.

A mafia based enemies to lovers tale that has gripped our hearts and pulled us on a turbulent journey to this moment.Love him or leave him, put the past to rest or let it destroy what could be.

Can she ever forgive him and allow her heart the happiness it deserves?.
Can Alexi truly be what she needs?