I am often asked in interviews and live videos about where Carrero began, what inspired me and such, and even though I have written many blog posts before, I feel like it’s always good to come back to the subject now the series is still growing and finding new directions to move.

It’s no secret that the original three books were inspired by a very well known trilogy, after I stumbled across the first of the movies on a duvet day while I was poorly. I was channel surfing and thought ‘screw it’ there’s nothing else on.

Having been someone who never followed the hype of books, I had refrained from reading Fifty Shades of Grey at all. So I had no idea what it was even really about until very late in 2016 after the first film was already on Sky TV. I just had no interest to be honest as it did not sound like my kind of book at all. My sisters and friends had yapped my head off in adoration of them and , well, me being the stubborn ass I am, refused to read them based on that alone. LOL

I had been in a reading slump for almost two years, nothing grabbing my attention and life had a way of just getting in the way of ever thinking of doing it. I hadn’t written in almost twenty years, so unbeknownst to me… that movie was about to change my life.

I watched it, confused because it did not seem to be what I thought it was about. I waited for the ‘shocking scenes’ the ‘abuse’ of Ana…..and well…..it was tame as hell. It was nothing of what I had heard and it piqued my interest to find out what happened next. I am someone who hates not seeing something through to the end!
So I thought the books must have a lot more in them that might be distasteful – because for all the hype and uproar to make out they are a sordid mess of abusing a woman into a BDSM relationship, there has to be more. I looked them up on amazon, got the first and read it that night. Always one who is determined to have a full rounded view before making an opinion.

I devoured all 3 in two days, all from my little sick bed and I never looked back. And now I own my own little collection! 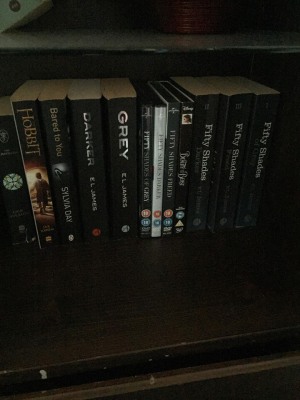 Now I am not going to get into a  debate over whether you like them or not… believe Ana is abused or not…. because to be honest, your opinion cannot colour my  connection to the books and the story I read. I didn’t see anything in those books which alarmed me, but what I found was a kindred.

I connected to Grey immediately. I felt like I understood him and what made him tick, in all his messed up vulnerable glory and it started an ember of fire inside of me. The misunderstood Dom and his longing to control life because he had none as a child. The anger issues he was putting out in unhealthy ways rather than facing his real scars. I saw myself in him (minus the red room….and the spanking.) I had a childhood that was not picture perfect and I myself have certain shared traits with Grey that have taken a lifetime to heal and overcome. I got him…. almost like looking in a mirror in some aspects and I think that is what the books had that the movie did not. I actually liked him more than Ana and my longing to see him released from his own personal hell was something I could relate to.

I could see the psychology at play – Grey was abused as a child and it manifested as an angry teen… violence, aggression, drinking and being wild, because he was in pain. Much like a lot of abused kids do. And much like many victims of abuse, they fall into a cycle of attracting abusers. Grey did. Elena abused him too, a family friend and someone he trusted, only she gave it a different spin – she was clever in grooming him, conditioning and normalising what she did therefore making him connect his need to control, with sex. He focused all his unhealthy behaviours connected to pain and put them into controlling and sex. He hid his scars and never faced them head on. She abused a child but she dressed it up in love and care and set the mould for how he perceived a fix to his issues. It’s why he still sought therapy, because deep down he knew he wasn’t healing. He was masking and putting a band aid on it. Until he let that part of him go and saw what she did was in fact abuse, then therapy never worked. He had to admit to himself that is what it was…..not a rescue. Not a trusted friend at all.
Something that was a hard pill to swallow.
Grey then carried on this cycle… consensually, with women who took something from his type of control and sex. Furthermore believing that this was normal and strengthening his need to believe it was what he needed.

Until Ana…. she was really the one with all the power.. she was the one who healed him and broke the cycle. With a gentle touch. She opened his eyes to real love and a relationship of tenderness and equal power. She taught him how to really love. And he had his big therapy break when he saw the reaction of his mother to finding out what Elena did to him.

It all came tying together.

Fifty shades is not about abusing a woman… it’s about a victim trying to find his way in life in all the wrong ways. It’s a journey of being healed.

Which is the essence of Carrero.

Over the weeks I reread them a couple times, cured my reading slump and yet I couldn’t get certain points out of my head. Couldn’t get the basic plot to stop haunting me…and that darn movie play list. Which I still listen to.

When I wrote as a teen there were certain subjects that were taboo…child abuse (although Virginia Andrews seemed to do well despite a lot of harsh criticism) and sexual abuse…. I just felt like having a victim as the hero of a romance with a HEA… it just opened up my mind like a lightening bolt. That somehow I had been mulling over, and waiting all this time for someone to say ‘be brave and do it’ for a pioneer to show me how. I guess in that respect I look up to Miss EL for exactly that reason. She just did not care about the backlash – she was a self made celeb after self publishing ( a route I never even considered) and her books were captivating in all their raw beauty. They weren’t perfectly written, or even amazingly done by publishing standards…… but they were something. To me they were brilliant! And a story which sticks with you and plays on your mind, is something all writers aspire to achieve.

She never claimed they were a masterpiece at all, but she is a storyteller and I read between the lines in her plot. I connected. And that is what makes them awesome.

Everyone connects to different things in life, see’s different perspectives.

My issue with writing romance in my teens was two things. One I had not enough life experience to make them count, and two – I didn’t want to write fluffy romance with no grit. I was a huge fan of Jackie Collins growing up and loved her frank and confident attitude to sex and dynamic characters.  The way she threw in really shocking topics and diversity and was not afraid to do so. I think I saw that same spark in E L James and that’s what drew me in. That same bold way in which she didn’t seem to fear what she put in her books. She wanted a sexy BDSM plot line and she did it.

I think it was that more than anything which kick started my little passion to go back and write again. I felt like I could do it, with an understanding of certain factors I felt were never explored in the books and the knowledge that it could be done, with great success. And I set myself a challenge to write a trio, rather than a standalone which is what I had always written. It was a personal goal and not really any ideas of grandeur or thoughts of the books ever really being read by many people.

As an ode to those books and the fact it truly is what started a series, I littered many little ‘In’ jokes and references to Fifty Shades through the first several books. Fans have spotted them and we have had many a discussion around these and the humour behind them. They have eagerly looked for them with every new release , although now we are onto book 8 I must admit, I have run out of them LOL. I guess, much like me, I am progressing away from the origin of the series and growing as they do. Leading me on a Carrero path and I am excited to see where it goes.

My books are definitely not a replica or comparison to Fifty….

Our plots are not similar in any way… although we do have certain things which are alike.

That’s where it ends.

The series has grown and become so much more than just a trilogy, with an idea. The first three books fuelled a second three, and now I am weeks away from releasing the second part to a third trilogy. It has grown with me and although the theme remains the same as the originals, my books are becoming so much more than I ever dreamed they would. I can see my own improvements myself and each book just gets more accomplished.

The previous books inspire the next ones, so they feed one another. I find new characters walk in somewhere and somehow seem to stand out as the next in line for a story. I guess if that continues then the series will never end.

BUT – I honestly can say E L James is still a role model for me.

She was fearless, she pursued what she wanted to write and she put it out there, even with lash backs and criticism. She pioneered the way for women to write sexy books and self publish, and that for me was huge! And through it all, she has remained down to earth and approachable.

I can only dream that one day I match her success… because whether you like her books or not – you have all heard of them and know exactly who she is!!