I haven’t done one of these in an age so decided to give you a little bonus.

Sophie was born in Ohio to parents who did little to deserve her. An alcoholic abusive father who inflicted all sorts of pain on both his wife and child. Sophie endured sexual and violent abuse from infancy until she ran away from home at the age of 14. Turning to her mother for help to escape her living hell she was faced with a woman who was so caught up in fear and her own personal nightmare that all she could do was give Sophie money and a chance to run.

Sophie has never understood or forgiven her mother for the years she allowed this to continue, or they way she told her to go, and was completely oblivious to the fact that her mother was an equal powerless victim to a dangerous man. That had she taken Sophie and run then he would have never stopped coming after them. She gave Sophie all she had which amounted to less than a hundred dollars, money she had been scrimping together to save them both, and by staying behind, made sure she would never be followed. Sophie never really grasps the concept that it was her mothers love for her while being trapped in a place she couldn’t fight out of that enabled her to be free. She has no idea of what he did to her when he found Sophie was gone.

When her father was imprisoned after Sophie found the courage to face him in court, her mother completely disappeared . Unable to face her own failings in saving her child and shamed that her baby endured so much while she stood by. Sophie is oblivious to the fact that by standing up and having him punished, she in turn saved her mother from the same existence and offered her a way to run from the same life and hide. With him in prison her mother was able to become invisible and start again.

Will they ever reunite? We shall see.

Sophie was adopted by the Huntsberger family with the help of the Carrero’s. Sylvana Carrero heads up a child abuse charity and works actively to put children in need in good homes. In the first trio of the series you find Emma benefits from that help in smaller ways and becomes a counselor eventually. Sophie is saved by Emma initially but it’s the Carrero’s who swoop in and give her a new life in the same street as they live. Enveloping her as much in their own lives as that of her new family.

Sophie meets Arrick Carrero by chance while visiting Sylvana in her home and unknown to her that moment is a huge turning point for both of them.

They become best friends and Sophie finds a way to finally let someone close enough to share her pain, guide her to the path of self healing. Arrick beccomes her light at the end of a long dark tunnel, bringing her out of herself and teaching her she can trust someone, even a boy.

Arrick and Sophie’s story is crazily emotional and with the release of book 6 you finally get to see where it ends.

Sophie is a girl who is complex and harbors a lot of issues.

She has a self defense system that means its her natural instinct to push people out, numb out the pain and put up walls. Close doors and stay alone. She does it so effortlessly it’s like breathing. It’s how she survived horrendous abuse her whole young life and never let it completely destroy her. She has more strength than she realizes and Arrick’s tattoo of ‘little warrior’ he got when her father was convicted, sums up Sophie perfectly. She is a fierce girl.

She’s fiery and lashes out impulsively, due to all the violence she endured in her childhood and has attended both intense counselling and anger management as a result. Many steps to healing along the way over the years she bonded with Arry. Deep down she’s a girl who just needs love and patience and Arrick gives her all of that. He understands her more than she realizes; he is her grounding force. He’s the only one she ever let all the way in.

Sophie is also on the spectrum although it’s never mentioned in the books. She has high functioning autism which contributes to her lack of awareness in what people want from her, her tendency to lash out and appear unemotional at inappropriate times. Her ability to mask and mimic people to get by in life and her chaotic trauma fuelled past means it has never been picked up or diagnosed.

Sophie is a Princess. A diva at times but it’s way more complex than just being spoiled. It’s an interwoven sense of self and self protection, an accumulation of adopted parents who over compensated and a best friend who pampered her to death. She has real compassion in her heart, can be very childish and immature at times and then flip it and be logical, mature and independent at others. Sophie is never dull to be around and she puts back the young and fun in the sometimes overly serious Arrick. She brightens his life while he provides calm in her storm.

She has a sense of humor and a dry sarcasm, a real warmth inside when she allows herself to show it. Her barriers have always been in letting people see she cares, afraid to make herself vulnerable and she is awful at reading peoples attentions towards her. She is not good at judging situations or people. It sometimes means she ends up in situations she couldn’t predict and has to rely on Arrick saving her time and again.

She’s young, obsessed with fashion and has a huge talent in clothing design and manufacture that leads her to the fashion academy to follow her dream. She has aspirations and a strong will and with so much inner fire and determination, Sophie will never be happy with a mediocre life or just to settle down and become a mother or wife. She is abhorrent to the idea of being a W, to a man , or a M to a B. Yes Sophie cannot even say those words. Such is the fear.

She lacks domesticity despite her earlier years of fending for herself and doesn’t see that girls should be the ones to have to settle for it anymore. She is happy to live on take out for the rest of her life.

Sophie needs stability, to know where she stands and security. She is a girl who does not do well in emotional crisis of the heart and fluctuations in familiar make her wholly insecure and erratic. She does well if she is left to thrive in a continuous environment with planned surroundings, no surprise changes, yet she doesn’t even realize it. The trauma and upheaval of her past means she needs calm, level and predictable outcomes to feel safe and secure.

Arrick supplies all of that with his obsessive nature in planning, straightening and keeping things grounded. Over thinker and analyser, sensitive and compassionate. Sophie spoiler.
Two halves to a whole that need each other for balance. 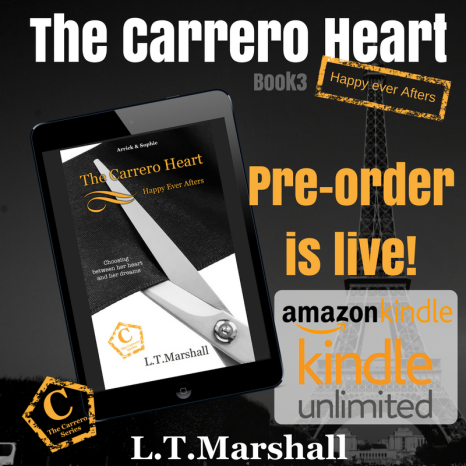